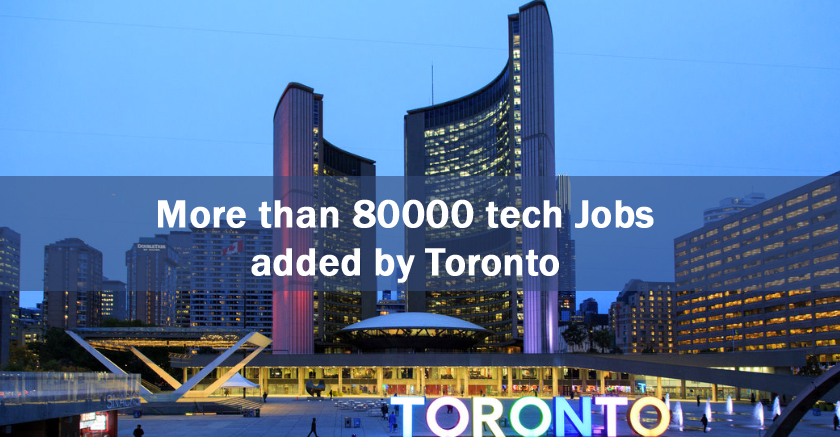 New report finds more than 80,000 tech jobs been added by Toronto in past five years

Capital of Toronto at the 3rd position in the annual scorecard of tech talent markets – As per new report findings – Toronto is among the top three cities in both the US and Canada as per new tech talent ranking and is also ranked at 3rd position on CBRE’s Scoring tech talent report on basis of 13 unique metrics which includes – talent supply, completed tech degrees, job growth, and the remaining metrics.

Toronto’s pool of tech talent grew at great speed among all 50 markets, adding the astonishing figure of 80,100 tech jobs in the span of 5 years, which is a 54% increase since 2013 as per the report.

With such an increase in the count of the tech talent pool as per the report, Toronto is almost “at par” with the top-ranked – San Francisco Bay Area for the number of tech jobs created since 2013.

Canada’s federal government and several provinces have setup up their immigration programs to address the growing labor shortage in the IT sector – opening the doors for the international IT talent.

Canada’s federal Express Entry System– The main pathway to permanent residence for skilled foreign workers and IT professionals to apply for Canadian permanent residence. The occupation of the candidates is not considered while awarding the scores to the candidates for the Express entry – the important factors that are considered: Age, Education, Skilled work experience and Language Proficiency in English/French, among other factors.

The Government of Canada invites the express entry pool of the highest-ranked candidates through the regular draw to apply for Canadian permanent residence.

The tech workers who receive a province nomination get an additional 600 points for their CRS score and are moved to the front-line for an ITA, this is for tech workers with the lower CRS scores than the eligible score of Express Entry draw. There are multiple provincial nominee programs with tech-focused options, Ontario’s new tech draws is the most recent addition to the list.

The Ontario’s new tech draw allows Ontario Immigration Nominee Program to search for the pool of candidates of the federal express entry with work experience in six tech occupations – the first draw this year was on Jul 12 issued 1,623 invitations to Express Entry candidates with a score ranging starting 439 to 459.

The Manitoba Provincial Nominee Program (MPNP) possesses multiple positions for tech workers under the category of  “Natural and applied Scientist and related occupations of In-Demand Occupation List” – these candidates working “in-demand occupation” category gets priority for an invitation to apply for a provincial nomination through its regular draw.

The two-year trial – tech pilot program of Canada’s British Columbia Provincial Nominee Program conducts weekly invitation rounds for tech workers from a B.C. employer with an eligible job offer in one of 29 tech-related occupations – the program has now been extended and is now set to run until June 2020.

Ontario’s new tech of the Ontario Immigration Nominee Program just like Canada’s Global skills strategy will be helpful to the top tech firms of the province to acquire the international highly-skilled talent.